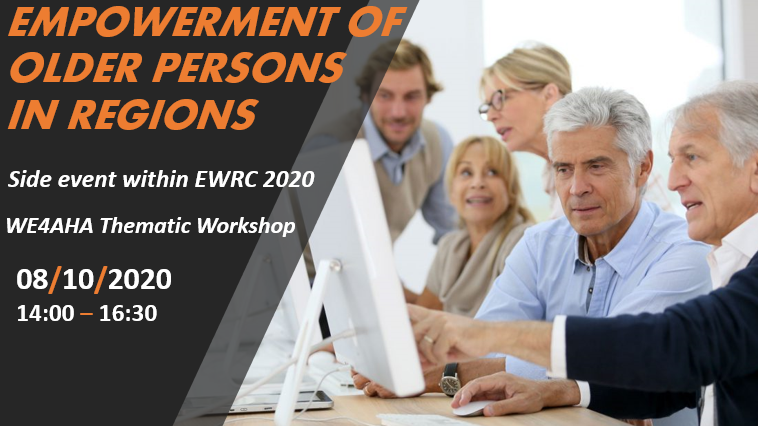 EMPOWERMENT OF OLDER PERSONS IN REGIONS

Partners:
The conference presented inspiring practices in empowering senior citizens in various cultural environments from Spain, Denmark, Sweden, Greece and Slovenia (altogether from 7 Reference Sites of the European Innovation Partnership on Active and Healthy Ageing (EIPonAHA). The regional showcases were complemented with an overview of the activities of the Active Assisted Living Programme (AAL). The event was supported by the European Regions Research and Innovation Network (ERRIN).

Concept:
Empowerment aims to increase a healthy lifespan by providing tools (digital and non-digital) and creating more opportunities for managing the health of older adults. Empowered senior citizens are more independent, have more control over their own lives and can influence decision making in their communities and in the organisations, they belong to. Reference Sites are in the driving seat of these innovations in their regions. They are awarded as recognition for their inspirational ecosystems and for developing, promoting and scaling-up creative and workable solutions that could improve the lives and health of elderly. The panel discussion featured good practices from eight regions from five countries and projects from the Active Assisted Living Programme.

Agenda_Empowering the older persons in regions

The TIM partnership brings together actors from industry, academia, the public sector and NGOs representing the interests of patients, financial institutions, and public health and care institutions. They all have strong university cores (Lund University, Hasselt University, Cardiff and Swansea University, Sherbrooke University and Basel University).

The platform is an excellent opportunity to present the activities of SRIP Health – Medicine and SIS EGIZ members to Europe and beyond, as each member organises at least one specialised global conference annually, and members also promote the achievements of TIM partners in third markets, such as China, Russia, India, Japan, the USA, South and Central America and Canada.

Among the partnership activities that can be used by members of SRIP Health – Medicine and SIS EGIZ, there is also a “soft landing” programme for partners (assistance for partners who open a company in their country, access to research funding sources, short exchanges of experts, search for business and research partners from top-notch institutes, companies and organisations (matchmaking), affordable rental of business premises and research infrastructure, test beds, brain circulation), and many other benefits and opportunities.

Participation in the TIM partnership will primarily enable Slovenian members to enter foreign markets more quickly and decisively. Thus, it will contribute significantly to introducing the necessary systemic and organisational changes and business practices in the field of health and medicine. At the same time, the TIM partnership is an important step towards building a European supercluster in the field of health and medicine, of which SIS EGIZ is now a part.

The partnership has a technical secretariat in Sweden (Multihelix a.b.). In April 2017, two representatives of the Secretariat visited Slovenia and received a warm welcome by SIS EGIZ, together with the coordinators of the SRIP Health – Medicine verticals.

You can see more about the TIM cluster and its members in the presentations below.

On 22 November 2017, senior political representatives from 29 of the 33 European cohesion regions, members of the Vanguard Initiative, met in Brussels to reaffirm their political commitment to further implementing the Vanguard methodology. The initiative, which is based on the “lead by example” principle, strives to ensure economic growth and jobs through interregional cooperation in the fields of industry, co-creation and co-investment, all on the basis of smart specialisation. The Vanguard Initiative is a joint initiative of the more advanced EU regions that emphasise advanced industry and industrial modernisation in their smart specialisation strategy.

On that day, five new advanced European regions joined the initiative, including Slovenia (in addition to the Autonomous Province of Trento, Lower Austria, and the Swedish counties Örebro and Värmland). The declaration on cooperation (the Milan Declaration) was signed by our Minister of Education, Science and Sport, Minister for Development, Strategic Projects and Cohesion, and Minister of Economic Development and Technology.

Luca del Gobbo, the current president of the Vanguard Initiative and Minister of University, Research and Open Innovation of Lombardy Region, invited partner regions to join forces to step up support for established pilot projects and developed demonstration cases within them.

As a sign of regional commitment, Del Gobbo announced the signing of the first Memorandum of Enhanced Cooperation of the Vanguard Regions participating in the pilot project “De- and Remanufacturing demo-case”. The project focuses on circular economy and was developed under the Efficient and Sustainable Manufacturing pilot. Minister Del Gobbo wants to set an example by signing the Memorandum. He believes that other regions will support the initiative and start the process of joining a group of leaders that are implementing and preparing the first investment projects. In addition to Lombardy, which is leading the project, there are other regions involved in the “De- and Remanufacturing” project: the Basque Country, Catalonia, Eastern Netherlands, Emilia Romagna, Flanders, Norte Region, Pays de la Loire, Saxony, Scotland, South Holland, Tampere and Wallonia. A joint effort at all levels will be needed to cover the total investment needs of around €40 million. The memorandum commits regional governments to support parts of the project implemented in their regions and to provide regional funding in the form of co-investment, which is based on the principles of smart specialisation and interregional cooperation.

Something similar is happening in the “3D printing” pilot project. A new member, the Swedish cohesion region Örebro County, has presented its efforts in this direction. Together with the Italian region Emilia Romagna, it is carrying out a complementary joint demonstration project on 3D‑printed hybrid material, mainly for automotive industry. Half of the investment needs of the demonstration project will be provided jointly by the Örebro County region and the Örebro University. In Emilia Romagna, financial coverage was provided by the University of Bologna, as well as the industrial companies involved in the project, which strive for mutual access to industrial facilities and knowledge.

The capacity of the Vanguard Initiative to implement an investment system to accelerate the industrial uptake of innovative technologies, supported by clusters and European Networks of Demonstration Facilities, will influence the success of the Smart Specialisation Platforms set up by the European Commission and inspired by the Vanguard initiative.

These are just the first two examples in a series of similar future investments involving a wider range of industry stakeholders, insofar as measures are provided in a coordinated manner at regional, national and European level.

Bert Pauli, Vice Governor and Regional Minister for Economic and EU Affairs of the Noord-Brabant Province, emphasised in his concluding remarks: “We need to upscale our success”. In order to strengthen EU value chains, he proposed the possibility to set up a “Vanguard Initiative virtual fund” to support pilot project investment, in accordance with the principles of variable geometry and a case-based approach.

The event was underpinned by the strong presence of European (EU) institutions, called upon by the Vanguard cohesion regions to develop new instruments suitable for an ambitious industrial innovation policy in the coming programming period. As finding solutions to support public-private investments is a shared responsibility, the Vanguard regions were invited to participate in setting up new mechanisms, and they all demonstrated their commitment to deliver. They also expressed their belief that EU institutions would play their part, including a financial contribution to support planned co-investments, thus accelerating the industrial uptake.

In this context, the Vanguard regions invited President Juncker, who was represented at the event, to coordinate the effort to create the right framework conditions for the emergence of truly new and competitive European industrial value chains, linked across regions and operating in this rapidly changing world.

It was pointed out that this would benefit numerous political agendas (regions, Member States and Europe) and, above all, the research sector, businesses and citizens.

Slovenia’s smart specialisation strategy S4 is a strategic approach by the state, companies, and institutions of knowledge and education for the social and economic transformation of Slovenia. The nine Strategic Research and Innovation Partnerships (SRIPs) bring together the most successful companies, research and educational organisations, and support institutions that combine knowledge, capital and boldness. They all work together to create a healthy living and working environment for the future, with the intention of preserving natural and traditional resources, and to create conditions for making the transition to Industry 4.0. Read more about it here.

The European Cluster Collaboration Platform is a platform that provides information about events, meetings, tenders and trainings aimed at promoting and connecting over a hundred European clusters and various fields. Read more about it here.

The Consumers, Health, Agriculture and Food Executive Agency (CHAFEA) is the European Commission’s executive agency responsible for the safety of food, medicine and agricultural products in the European Economic Community. Read more about it here.

The European Medicines Agency (EMA) is the European Commission’s executive agency responsible for the scientific assessment, control and safety of medicines in the European Economic Community. Read more about it here.

The TIM partnership connects science parks, technology parks and innovation systems in the field of life sciences in Scandinavia, the Benelux, Canada and Switzerland. Partners participate in the exchange of knowledge, experience in the management and administration of organisations, and in the promotion of joint appearances in third markets. Read more about it here.